Now it’s time to explore more of Elizabeth’s history and sample the diversity that makes this City so great. Wander up to

Historic Midtown Elizabeth, where you can enjoy more than a dozen historical sites and markers, which recount the days leading up to the founding of the United States of America.

You can also stop and shop or have a quick bite in the Midtown Shopping district or explore the history in this area with a walking tour.

Start your walking tour at the historic Elizabeth Public Library, and check out an ongoing exhibit there. This elegant building, which recently received significant upgrades over the past decade, was a gift from Andrew Carnegie in the early part of the past century. Make your way past the grand Union County Courthouse, and take some time to admire the historic monuments and fine architecture.

Follow the road along Broad Street to the First Presbyterian Church, which was also an important battleground during the Revolutionary War, and check out its fascinating cemetery – if you dare. Going north on Broad Street, you will find St. John’s Episcopal Church, a brooding masterpiece. The church has a beautiful interior with elegant stained glass, fabulous woodwork, and another fascinating cemetery to boot.

Located further north on Broad Street is the Historic Art Deco, Hersh Tower, built during the height of the depression as the tallest building in Union County. Across the street is the old “United County” bank building built in the early 1900s and an example of that time period’s style of bank. The building currently houses a new bank and offices.

Just up the West Grand street is the City’s main New Jersey Transit Train Station, with its newly renovated Plaza, where concerts are held in the Spring, Summer and Fall. The City’s 9/11 Monument is located here. 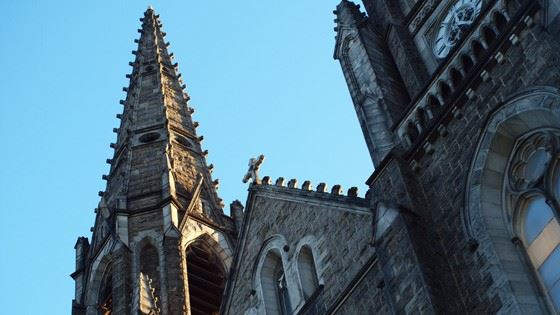 Back on East Jersey Street there’s the historic Ritz Theatre, an Art Deco masterpiece. With 2,772 seats, the theatre is one of the largest - and oldest - operating theatres in the state dating back to 1926.

The Ritz has been magnificently restored and currently features world-class performances. Famous acts have performed there throughout its storied history such as:

Further down East Jersey Street is historic Boxwood Hall, the home of Elias Boudinot, President of the Continental Congress, and Jonathan Dayton, the youngest signer of the Constitution. Across the street is a rare treasure, the last remaining original Royal Governor’s mansion in the United States, the Belcher Ogden Mansion, the residence of Royal Governor Jonathan Belcher.

The Bonnell House is also nearby, and it is Elizabeth’s oldest building. You may make an appointment to tour Boxwood Hall at 908-282-7617 and Belcher Ogden by calling The Historical Society of Elizabeth, New Jersey at 908-581-7555.

Just off East Jersey Street is Winfield Scott Park, named after an important military figure. In this park, you will find a huge Veterans’ monument, as well as monuments to the crew of the Challenger and Martin Luther King, JR. among others.

Proceed south to Elizabeth Avenue, and you begin to get a sense of the kaleidoscope of ethnicities that is Elizabeth today. Elizabeth Avenue is known as “The Market” because anything you could ever want is located on these blocks. Also an important portal during the Revolutionary War, history buffs can find a marker and statue of a Minuteman at historic Union Square, where a key battle was fought.

Positioned right next to the Historic Elizabeth Midtown Train Station, the Ped

estrian Plaza has been renovated to give travelers a full service transportation stop.

Our vision for this location was to create a meeting place, as well as create a cultural hub for travelers and residents alike. As a gateway for travelers and an important piece of Elizabeth's history, the Midtown Pedestrian Transit Plaza will soon provide a festive dining experience as well as a celebration of the arts, creating an artistic center right within Elizabeth's Midtown.

Continuing to experience a renaissance, the Pedestrian Plaza is one more testament to the exciting revitalization that Elizabeth is undergoing.